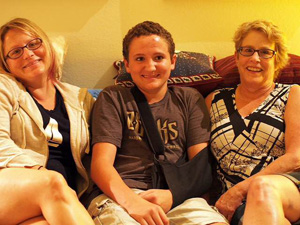 Sports and team sports of all types, is what drives my grandson, Joshua, from one day to the next. He checks on team scores and standings the minute he gets up and it is the last thing he does before he goes to bed, sometimes sneaking a look during the night. He knows team players by their numbers rather than their names. Remember when #19 played for the A’s, he asks? He loves baseball, basketball and football (A’s, Warriors and Raiders are the local favorites) but will cheer for other teams as well depending on who is playing and what team everyone else doesn’t like. He loves to talk sports with anyone that is willing.

While this might not sound unusual for a typical 17 year old young man, Joshua does not remember letters and recognizes numbers only as single digits with no value attached so he can’t tell which number is higher in a final score. He doesn’t read so he has learned to recognize teams by their mascot/logos/colors but often has to ask who won the game based on the scores. Did the red team with the bird win or did the green team with yellow stripe win, he asks?

He doesn’t understand the game rules but uses visual cues and verbal information to pick up the basics for the game and the terminology, and uses those same skills to navigate the world around him, trying to meet expectations that are often beyond his grasp. He gets frustrated when his family isn’t as observant and didn’t notice the car we passed with the rival school bumper sticker or the plane on the tarmac with the broken wing. Seeing the world through Joshua’s eyes gives his family different and amusing perspectives about everyday events and life in general.

At 18 months, after numerous day long sessions with electrodes and being tethered to a machine, he was diagnosed with epilepsy, with many seizure types occurring on an hourly basis; each seizure erasing memory and affecting other brain functions. Josh currently has success with a mix of seizure medications and devices to control the seizures with the minimum amount of side effects which can be as difficult for Josh as the seizures themselves. It is an ongoing struggle as getting too tired, catching the flu or having a growth spurt can cause increases in seizure activity leading to life threatening visits to the ER followed by more trial and error with the medication mix. Josh also has developmental delays which contribute to the memory and learning issues.

Joshua family life is a bit unusual as he lives with his Mom and me and we tag team his participation with Special Olympics practices, games and tournaments, and other sporting events. We often have to research game rules to understand enough to explain to Joshua what is happening during games. ‘Why does one hockey team have less players than the other team,’ he asks? Like many typical kids or teenagers and their grandparents, he and I have formed a great bond – which he often uses to his advantage! But I love that and hope our bond grows even stronger as he continues into his adult life.

While Josh participates in many Special Olympic sports activities, he really just wants to be ‘one of guys’ on his high school sports teams. ‘When can I be on the junior or varsity team?’ he asks? It is hard to explain that while he looks just like ‘one of the guys’, he won’t ever be able to be a player on the high school teams. He currently does have a role with the high school baseball team to help with the team equipment and be with the team at their practices and games. This allows him to wear the uniform, ride the bus to the games and hang out with the players in the dugout allowing him to be ‘one of the guys’ for a brief period of time.
When Josh becomes an adult, he wants and expects to be able to live independently and work in his community just like other young adults. It will be one step closer to being ‘one of the guys’ that he so desperately want to be.